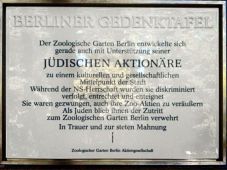 On 28 June, the Berlin Zoo unveiled a commemorative plaque in memory of the Jewish shareholders that held stock in the company.

The ceremony was attended by city and zoo officials, including Berlin Culture Secretary Andre Schmitz and Gabriele Thoene, the zoo's business director, who initiated the installation of the plaque on the Antelope House.

In 2002, the Berlin Zoo started looking into its history during the Nazi era and commissioned a report by historian Monika Schmidt.  The report examined the policies put into place after the Nazis came to power in 1933 that excluded Jews as board members, stockholders, and eventually as visitors to the zoo.

After the Nazi Party came to power, the four Jews on the supervisory board were eventually removed and replaced by Nazis.   Beginning in 1938, Jewish shareholders were banned from passing on or selling their shares, and could only sell them back to the zoo at a price much lower than they originally paid.  Jews could also no longer acquire shares, and the report found that it was possible that Jewish shareholders were eventually forced to sell back their shares to the zoo.  From 1939, Jews were banned from even visiting the zoo.

The plaque is intended to be a commemorative gesture to the descendants of the Jewish shareholders of Zoologischer Garten Berlin AG.  The zoo does not intend to offer compensation.

The Berlin Zoo will continue to investigate its history, and plans to look into the individual biographies of shareholders and highlight the repression of the issue in the decades following the war. The zoo intends to publish a book on the subject in the future.

Berlin Culture Secretary Andre Schmitz also announced that the year 2013 will be officially dedicated to the memory of Jewish citizens of Berlin, and the city will work together with institutions and social groups to commemorate the contributions and achievements of Berlin's Jewish community.

Greece takes over the IHRA Presidency from Germany

Today, 1 April, the IHRA Presidency will be handed over from Germany to Greece. This means that the outgoing Chair, Ambassador Michaela Küchler, will take on a supportive role as a member of the...

Today, Germany’s Federal Cabinet adopted the IHRA’s non‑binding working definition of antigypsyism/anti‑Roma discrimination, making Germany the first country to do so at the national level. The import...

"The Lesson: Teaching and Learning about the Holocaust in Europe" film screening and panel discussion

“The lessons of the Holocaust hold universal meaning, but they must speak to our current situation if they are to have an impact,” said IHRA Chair Michaela Küchler in her welcoming remarks. The Lesson...