On 5 July, in front of building No. 9 on Maršala Birjuzova Street, Belgrade saw the installation of its first Stolpersteine, or “stumbling stones.” Dedicated to Emil Dajč, Avgusta Dajč, Hilda Dajč and Hans Dajč, the stones will remind passersby of this Belgrade family, the horrors they faced during the Nazi occupation, and their murder at Staro Sajmište, the Old Fairground Camp.

Remembering the victims of the Holocaust in everyday life

The Stolpersteine are part of the largest decentralized memorial in the world dedicated to the victims of the Holocaust. Each stone honors the memory of one victim. This international global project, led by the German artist Gunter Demnig, allows for Nazi crimes to be remembered in everyday life, on the street. Placed in front of the houses where victims lived, the stones allow passersby to literally “stumble” over them, and to start thinking about the individuals who were murdered. Looking down and reading the names makes them symbolically bow to the victims of Nazi terror.

The installation was accompanied by a formal ceremony. President of the NGO Haver Serbia, Sonja Viličić, addressed the audience. Referencing the Talmud, she opened her address by saying that a person is only forgotten once their name is forgotten. She thanked everyone present for coming and pointed out that this was a very important day for the Jewish community in Belgrade. 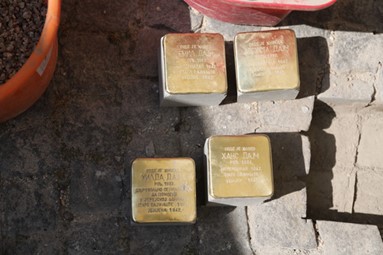 Ambassador of the Federal Republic of Germany in Serbia, Thomas Schieb, said that the victims of the Holocaust must not be forgotten and that Stolpersteine were the right way to save the murdered from oblivion and to preserve their dignity.

At the end of the ceremony, the artist and project creator, Gunter Demnig, laid the stones, “planting” them on the Belgrade cobblestone pavement.

Six further stones were installed in other areas of the city: at 30 Dobračina St. for Geca Kon and Elza Kon, at 53 Gundulićev Venac St. for Matvej Ajzinberg, at 8 Solunska St. for Aleksandar Bril, and at 29 Andre Nikolića St. for Dr Simon Bril and Evgenija Bril.