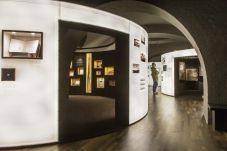 Experience "HOME" – the Danish Jewish Museum’s special exhibition about the effects of war and persecution in the wake of World War II.

99% of the Danish Jews survived the Holocaust, and that story is world famous. However, the consequences of the roundup of the Danish Jews in October 1943 after the war are far less well-known. The Danish Jewish Museum intends now to rectify this with the special exhibition HOME.

The point of departure for the exhibition is the period following the liberation of Denmark on 4 May 1945, during which the Danish Jews returned home to Denmark. They had had widely varying experiences during the war, and their experiences of returning home were likewise varied: some had lost everything, others returned to an intact home. The return was also a reunion for families that had been split by exile and deportation, and families whose children had been hidden in Denmark after October 1943. Returning home meant learning of the Nazi extermination camps, worries about the fate of family and friends and dealing with traumatic experiences and grief.

They gritted their teeth; it was necessary to move on; others had suffered much more. Yet this did not mean that life after the war was without great challenges for many Danish Jews. Could everything be the way it had been before? The special exhibition focuses on the lives of the Danish Jews after their return home and the many long traces left by the war.

The special exhibition HOME will be at the Danish Jewish Museum until 30 November 2014.

For more information about the Danish Jewish Museum and the special exhibition HOME please click here.

During the last months of the Second World War, the Nazis began forcibly evacuating prisoners on death marches across Europe. By April 1945, the Stutthof concentration camp, established by Nazi...

Conference on Genocide and Warning Signs

Humanity in Action (Denmark) is pleased to announce the conference "Pre-Genocide. Warnings and Readiness to Protect" to be held from 26 - 28 September 2018.&#13; &#13; The conference reflects on the question...

Conference 'Holocaust in the Nordic Countries'