On 9 September 2021, Slovakia commemorated the Memorial Day for Victims of the Holocaust and of Racial Violence. Established in 2000 by the Slovak Parliament, the day marks the date in 1941 when the Slovak government issued a decree on the legal status of Jews, the so-called the Jewish Codex. The Codex led to deportations which resulted in the murder of approximately 70,000 Slovak Jews.

This year marks the 80th anniversary of this tragic event. The Jewish Codex contained some of the strictest anti-Jewish measures in all of Europe.

"In 1940 and 1941, degrading measures arrived. I think there wasn't a day when a new one wasn't issued. They drove us out of schools. They forced us to wear a yellow star. We children folded our coats like our father did, so that the yellow star would be obscured in its folds. We weren't allowed to go to cinemas. We were prohibited from leaving our homes in the evening," said Holocaust survivor Eli Vago regarding these cruel measures.

The day before the Memorial Day for Victims of the Holocaust and of Racial Violence, on 8 September 2021, the Slovak government adopted a public apology for the Jewish Codex. In the public declaration, it stated:

"Today, the Slovak Government feels a moral responsibility to publicly express sorrow over the crimes committed by the government of the day, especially over the fact that on 9 September 1941 it passed a shameful decree restricting the basic human rights and freedoms of citizens of Jewish origin." 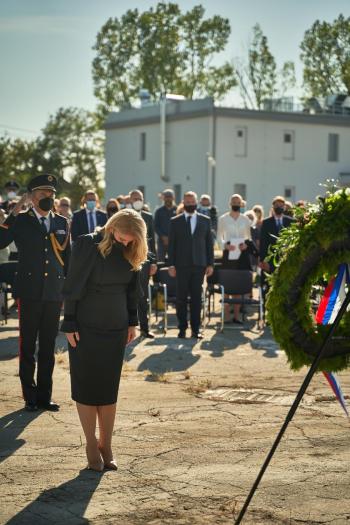 As every year on this occasion, many events were held in towns throughout Slovakia, including commemorations, exhibitions, conferences, seminars, lectures, and cultural and educational events in schools, libraries, and institutions. Established tradition is the “Reading of the names of the victims of the Holocaust”, that this year was held in almost 70 towns in Slovakia.

Project aims to raise awareness about the Holocaust in Lithuania

In just a few months of summer and autumn of 1941, Lithuanian Jewish communities were almost completely destroyed by the Nazis and their local collaborators. &#13; &#13; This year, the national project "The...

On 2 August, Roma Genocide Remembrance Day, we remember the night when thousands of Roma women, men and children were murdered by the SS during the "liquidation" of the so-called "family camp" for...