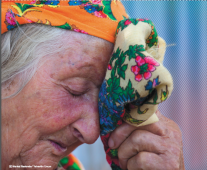 On 10 May Yahad in Unum opened a exhibiiton at the Paris City Hall presenting the results of their research projects to investigate the fate of the Roma during Wolrd War II.

Yahad-In Unum is dedicated to uncovering the genocide of the Roma people in the former territories of the USSR, Romania and Serbia. Through archives, collecting testimonies, and identifying execution sites, Yahad in Unum works to investigate and establish the fate of the Roma during World War II. The project involved interviewing Roma survivors and mapping the deportation routes. The project aims to give Roma victims’ memories back to their families, and to give the Roma people back their history.

Yahad in Unum seeks to unsilence a chapter of history that has remained silent for far too long. The organization seeks out eyewitnesses to the executions of Jews and Roma as they work towards identifying each execution site and mass grave.

The invitation for the opening of the event can be found here. The research was co-funded by the International Holocaust Remembrance Alliance grant programme.

With the help of the International Holocaust Remembrance Alliance (IHRA) Grant funding stream, Camp des Milles has developed an online tool entitled ‘Three Steps from Racism to Genocide’ which allows...

On 13 July, 2017, some 50 experts, including representatives of governments, international organizations and the International Holocaust Remembrance Alliance (IHRA), met to discuss effective practices...