On 2 August, Roma Genocide Remembrance Day, we remember the night when thousands of Roma women, men and children were murdered by the SS during the "liquidation" of the so-called "family camp" for Roma at Auschwitz-Birkenau in 1944. Together with governments and civil society organizations from all over the world, we honor the victims and survivors of the Roma genocide.

Commemoration events play a significant role in advancing remembrance of this genocide and in countering anti-Roma discrimination. An overview of events, both virtual and in-person, can be found below. If you would like to add your event to this overview, please send an email to info@holocaustremembrance.com.

The Documentation Center and Central Council of German Sinti and Roma (together with the Association of Roma in Poland and the Auschwitz-Birkenau State Museum) will organize a small physical commemoration event on 2 August at Auschwitz-Birkenau, as well as an online commemoration on the dedicated website: https://www.roma-sinti-holocaust-memorial-day.eu/

The IHRA Chair, Ambassador Chris J. Lazaris, will provide an address to the virtual commemoration event.

The "Dikh He Na Bister" youth remembrance event will bring together a group of 70 young Roma and non-Roma from 12 countries around 2 August at the International Youth Meeting Center in Oswiecim. Further commemoration events from partner organizations will also be shared on the Dik He Na Bister Facebook page.

Hannah Lessing, Austrian Co-Head of Delegation and Secretary General of the National Fund of the Republic of Austria for Victims of National Socialism, will be attending the commemoration ceremony held at Auschwitz-Birkenau together with the Austrian Counsel General of Cracow. 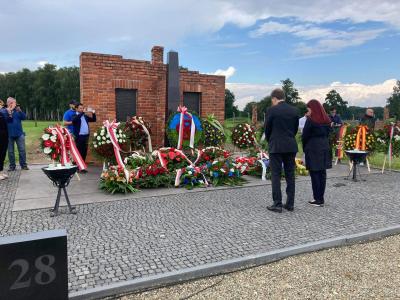 _errinern.at_ will host a presentation of „Einfach weg!“ Verschwundene Roma-Siedlungen im Burgenland by Dr. Gerhard Baumgartner and Dr. Herbert Brettl, a publication on recent research on the genocide of the Roma in Austria. The presentation will be livestreamed on their Facebook page.

In Canada, an online campaign will be organized by Romanipe to raise awareness of the genocide of Roma and the effect that the neglect of this genocide has had on anti-Roma sentiment today. Further information can be found on the @Romanipe Facebook and Twitter social media channels.

Organized by the main Roma association in Croatia, “Kali Sara," the commemoration ceremony for Roma victims will take place on 2nd August in Uštica, a subcamp of the Jasenovac camp.

IHRA delegate Paul Hagouel will give an address at an event hosted by the Roma Women's Association of Dendropotamos on Monday 2 August, held both online and in person, outside the George Café on Konstantinoupoleos Street, Dendropotamos.

The program included commemorative addresses, several musical pieces, and the screening of a recently completed documentary on Roma genocide.

“I am not only a Roma but also a gay person. Which one of these two labels would have been stuck on me in the 1940s? The black or pink triangle? Or would they have just shot me dead, as they did with millions of others?” Thus did Dr. Dezső Máté, social researcher and Roma LGBTQ activist, begin his speech at the commemoration of the victims of Roma genocide held at the Holocaust Memorial Center in Budapest, jointly organized with the Roma Production Office Foundation.

Ms. Katalin Viktor Langerné, Deputy State Secretary for Social Inclusion of the Ministry of the Interior welcomed the participants in the name of the Hungarian government.

András Mata, the Gypsy Soloists Orchestra, the Romano Glaszo Ensemble with the students of the Budaörs Tanoda and Helena Varga contributed to the musical part of the program. 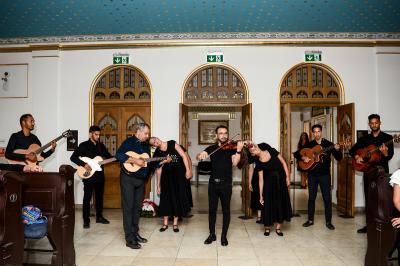 The program concluded with a church service and lightning of candles in front of the Memorial Wall of Victims. 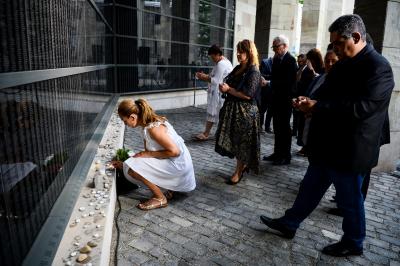 This was followed by the screening of a new documentary, Doomed to Destruction, by director Robert Papp to the 150 participants of the commemoration.

After the program, participants walked 1.5 km to the memorial of the Roma genocide in Nehru Park on the Danube and laid flowers in remembrance.

On 1 August 2021 a wreath laying ceremony will be held at the Museum of the Slovak National Uprising in Banska Bystrica. The ceremony is organized by the governmental plenipotentiary for Roma communities, Ms. Andrea Buckova, in cooperation with In Minorita. More information can be found here (in Slovak).

A photo exhibition by Matej Beranek from the Holocaust Museum Sered on the persecution of Roma during the Slovak State will open on 2 August 2021 at the Holocaust Museum – Museum of the Jewish Culture – Slovak National Museum in Sered. A memorial concert by Imrich and Pavol Farkaš will also be held, in cooperation with the German Embassy in Bratislava, the Trnava Self-governing Region, and the Freunde der Bruno Walter Musiktage civic association.

Further commemorative events will be held throughout Slovakia, organized by local municipalities and non-governmental organisations. The towns of Hanusovce nad Toplou, Dubnica nad Vahom, and Nemecka, places related to the persecution and murder of Roma during the Second World War, will hold ceremonies on 31 July 2021. Further information can be found here (in Slovak).

The Center of Jewish Cultural Heritage Synagogue Maribor and the EPEKA  Association will organise collaboratively a commemorative event “The Night That Silenced the Violins” on 2 August in Maribor. Czech group Der Šenster Gob will perform in the musical part of the event, and Dr Vera Klopčič, a member of the Slovenian delegation to IHRA, will give an address.

On 6 August, a tree-planting ceremony commemorating the 50th anniversary of the first Roma congress will take place in Petanjci, followed by a roundtable event in Murska Sobota. The event, hosted by the Roma Association of Slovenia and partnering organisations, will conclude with the laying of a wreath at a memorial plaque to Roma victims of the genocide committed during the Second World War.

On 29 July, an official commemoration ceremony was held to honor the victims of the Roma genocide, or Samudaripen.

The Living History Forum, in co-operation with the Swedish Roma Filmfestival, SIRF, will be arranging a memorial ceremony on Raoul Wallenberg Square in central Stockholm.

The Living History Forum has also developed a printable exhibition (in Swedish), free to download, focusing on the liquidation of the Roma Camp at Auschwitz-Birkenau. This resource can be used by schools, libraries, congregations and others who would like to highlight Roma Genocide Remembrance Day.

The Living History Forum will also produce a program on the Roma genocide and the history of anti-Roma racism, to be aired by the Swedish national broadcasting company UR.

Image: Participants in the seminar “Dikh he Na Bister” at the youth commemoration at the Auschwitz-Birkenau Museum and Memorial in 2014. Courtesy of Ternype.
Genocide of the Roma
International
Austria
Canada
Croatia
Greece
Hungary
Slovakia
Slovenia
Spain
Sweden

What is Holocaust distortion and why is it a problem?

Holocaust distortion is an urgent and growing issue. “Distortion of the Holocaust is found in all kinds of places. From facts twisted on the internet, to opportunistic statements by politicians...

Share the reasons why you remember this International Holocaust Remembrance Day

Commemorated on 27 January, the day Auschwitz was liberated by Soviet forces in 1945, International Holocaust Remembrance Day invites us to learn about and reflect upon the lived experiences of the...

A Charter for the specificities of Holocaust Heritage

by Safeguarding Sites team members Gilly Carr, Steve Cooke and Margaret Comer&#13; &#13; Holocaust sites are inherently complex. They are the product of ever evolving memorialization practices and at times...