9 October marks the day that deportations of Romanian Jews to Trandsniestria began in 1941. Today, it represents the date of National Holocaust Remembrance Day in Romania. Established by Government Decision No 672 of 5 May 2004, this day sees events commemorating the victims of the Holocaust every year.

This year, in spite of the particular context created by the pandemic, several events were organized both within Romania and abroad, and various institutions issued press releases and statements.

On 8 October, the Romanian Cultural Institute in Tel Aviv marked National Holocaust Remembrance day with an event organized in partnership with the Romanian Embassy in Israel, the Association of Israelis of Romanian origin and the Karov Theater in Tel Aviv. The event included the premiere of a theater play (The Last Cigarette of Fondane by Catalin Mihuleac), which described the last moments in the life of the Romanian poet of Jewish origin Benjamin Fondane (Fundoianu).

The official commemoration ceremony of laying of wreaths was held on Friday, 9 October 2020, at the Memorial of the Victims of the Holocaust of Romania in Bucharest. The event is traditionally organized by the Elie Wiesel National Institute for the Study of the Holocaust in Romania. This year the event was attended by Ludovic Orban, Prime Minister of Romania, Andrei Muraru, Presidential Counsellor, Marcel Vela, Minister of the Internal Affairs, Marius Bălu, Deputy Minister of Defence, Daniel Rădulescu, President of the National Agency for Roma, Aurel Vainer, President of the Federation of Jewish Communities of Romania, a group of pupils from the Lauder-Reut Educational Complex in Bucharest and representatives of the Diplomatic Corp from Bucharest. 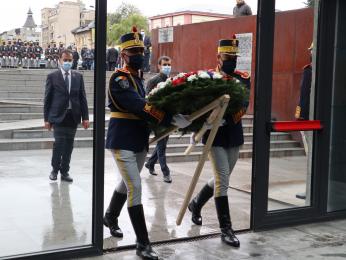 On 9 October 2020, the Romanian Ministry of Foreign Affairs presented for public consultations the Draft National Strategy for preventing and combating Antisemitism, Xenophobia, Radicalization and Hate Speech. All interested citizens and institutions can present their comments and proposals until 9 November 2020.

From 10 to 12 October 2020, the Romanian Cultural Institute in Tel Aviv, in partnership with the platform “Future of Memory”, presented online the documentary “Gestures of Resistance”, which brings together testimonies of survivors of the Holocaust from Romania, the Czech Republic and the Slovak Republic regarding different means of resistance against fascism (Chapter 1: Armed Resistance; Chapter 2: Civic/Political Resistance; Chapter 3: Resistance through Art; and Chapter 4: Resistance through Solidarity).

Important changes to the law governing how victims of racial persecution in Italy and their relatives could seek compensation were made on 30 December, the Union of Italian Jewish Communities (UCEI) a...

Arolsen Archives: "Crowdsourcing is crowd wisdom at its best"

Throughout 2020, the COVID-19 pandemic has posed a significant challenge to commemoration of the Holocaust. In response, the IHRA Chair Ambassador Michaela Küchler has announced the German Presidency...

Digital commemoration of the November Pogrom

This year, 9 November marks 82 years since the beginning of the November Pogrom.&#13; &#13; Over the course of two days in 1938, hundreds of synagogues were burned, Jewish homes and businesses ransacked, and...