Kindertransport Statue Opened in The Netherlands 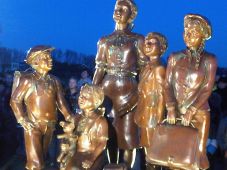 A statue dedicated to the Kindertransport was unveiled at the Hook of Holland on 30 November 2011.

Designed by internationally acclaimed sculptor Frank Meisler and supported by the Association of Jewish Refugees (AJR), Channel Crossing to Life commemorates the Kindertransport and recognizes the role played by Dutch people in helping to save the lives of Jewish children fleeing Nazi oppression.

Former Kindertransport children who now live in the UK, Germany, Switzerland, USA and Israel joined schoolchildren from the Hook of Holland, who lit the path to the statue and presented the Kindertransport members with roses.

After speeches from Frank Meisler and Mayor of Rotterdam Ahmed Aboutaleb, Sir Erich Reich, Chairman of the Kindertransport Group of the Association of Jewish Refugees (AJR), gave thanks to the Dutch people who helped ensure the safe passage of the children to Britain. Speaking ahead of the unveiling, Sir Erich said, "This statue is a fitting memorial dedicated to all those who perished at the hands of the Nazis and will be a permanent reminder of the continuing need to fight intolerance, racism and antisemitism."

Guests at the unveiling included the Vice President of the Bundestag, Petra Pau, and the families of those from the Kindertransport including their children, grandchildren and great-grandchildren.

Frank Meisler has also created statues commemorating the Kindertransport at Liverpool Street station in London, at Gdansk in Poland, and at Berlin's Friedrichstrasse station.