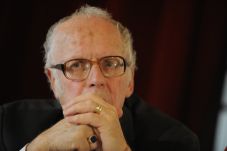 Miloš Pojar, former ITF Chair during the 2007 Czech Chairmanship, died in Prague on Monday at age 71.

During his Chairmanship, Pojar successfully led the ITF through a period of many changes in the organization.

Pojar served as post-communist Czechoslovakia's first ambassador to Israel and was also the Chairman of the Organizing Committee for the Holocaust Era Assets Conference held in Prague in 2009.

"Above all, we owe him the work he carried out for Czechoslovak and Czech relations with Israel, and also Czech-German relations," Czech Foreign Minister Karel Schwarzenberg said in a statement. "As first Czechoslovak ambassador to Israel he significantly contributed to the deepening of our relations."