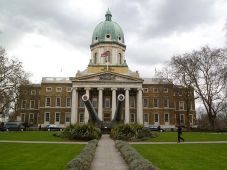 The Imperial War Museum London is hosting the fourth international multi-disciplinary conference on current research on survivors of Nazi persecution from 4-6 January 2012.

Past conferences were held in London in 2003, 2006, and 2009, and this meeting will continue to build on areas previously investigated as well as open up new fields of academic enquiry.

The conference aims to bring together scholars from a variety of disciplines who are engaged in research on all groups of survivors of Nazi persecution. These include - but are not limited to - Jews, Gypsies and Slavonic people, Jehovah's Witnesses, homosexuals, Soviet prisoners of war, political dissidents, members of underground movements, the disabled, the so-called 'racially impure', and forced laborers.

The event will be attended by around 160 scholars and reflects the growth of specialist study in this field.  Thirty panels will convene over the three-day period, with a variety of themes including memory and identity; reparation, restitution, compensation; reception and resettlement; remembrance and memorials; child survivors; and trials and justice.

The conference is jointly organized by Suzanne Bardgett (Imperial War Museums), Professor David Cesarani (Royal Holloway, University of London), Dr. Jessica Reinisch (Birkbeck College London), and Professor Johannes-Dieter Steinert (University of Wolverhampton).  The keynote speech of the conference will be given by Paul Shapiro, Director of the Center for Advanced Holocaust Studies at the United States Holocaust Memorial Museum.