The Safeguarding Sites Project aims to visit five sites over the course of five years to gain insight on best practice for site management and preservation of sites of the Holocaust and genocide of the Roma. This insight informs its Charter for Best Practice. In 2019, the group visited Alderney in the Channel Islands, and now, after a year of delay due to the pandemic, at the beginning of August, the second expert visit was able to take place in Austria.

The purpose of our trip to the sites of Mauthausen, Gusen and Gunskirchen was twofold: first, to observe examples of good practice and to hear about and see the challenges that the sites face today; and second, to improve the draft Safeguarding Sites Charter for Best Practice, which the team is currently refining.

The three camps we visited are very different from one another and thus offer invaluable insight into the realities of modern-day site preservation. Mauthausen was built inside a purpose-built fortress which still exists today and comprises many original camp buildings and structures. It is a few kilometers away from the village of Mauthausen.

The modern village of Gusen, on the other hand, was built on the footprint of the camp destroyed in 1945. While several original buildings survive, they are – somewhat incredibly to an outsider – used as private residences today.

The Gunskirchen camp operated for only three weeks from within a forest before being liberated by US forces. Several thousand prisoners from Mauthausen were taken there in the spring of 1945. All that survives today are the bases of some concrete hut platforms, and a scatter of textiles and artifacts on the forest floor. 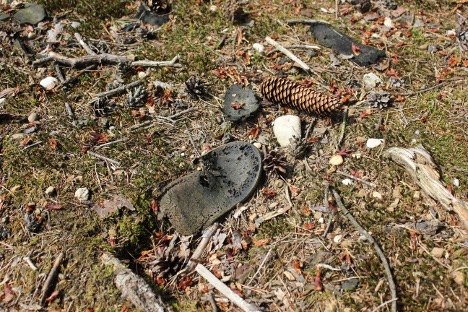 Many of these objects have been collected by an archaeological team led by Professor Claudia Theune, who joined our expert visit. Professor Theune has also excavated at Mauthausen and Gusen and was an invaluable member of the team in her role as academic advisor.

Despite their differences, the three sites have something in common: not one looks exactly as it did in 1945. Even Mauthausen, which comes closest to its appearance in 1945, has undergone changes: some barracks were torn down, other buildings renovated, the barbed wire replaced, a visitor center added, and – when we visited – the infamous quarry had been overtaken by foliage.

At present, the steps in the quarry up to the camp – the “stairway of death” or Todesstiege – are partially hidden by bushes, probably a consequence of the temporary fence which blocks them.  This means that the connection for visitors between the camp and the stairs has been severed. 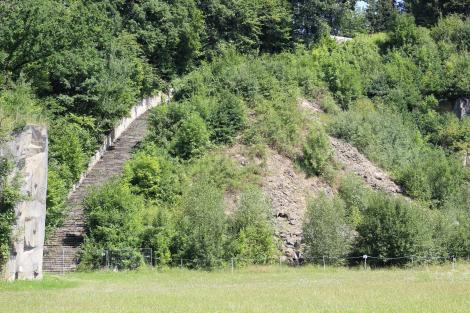 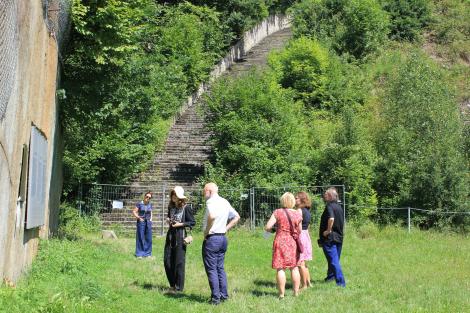 While walking up the stairs is important for survivors and their descendants, it is also a way for the visitor to pay homage to former prisoners and to understand the layout of the camp. Current Austrian insurance legislation has led to the stairway being blocked. The director of the Mauthausen Memorial, Dr. Barbara Glück, has been handed a list of 400 areas within the camp which need to change in order to comply with insurance legislation. This is certainly a challenge, and each one of these changes will lead to the site losing further original elements, or facing moderation to the original architecture.

Dr. Glück has also worked hard on building relationships with the people who live in Gusen today. Alongside a powerful audio tour, developed in 2005, a new app has been launched. 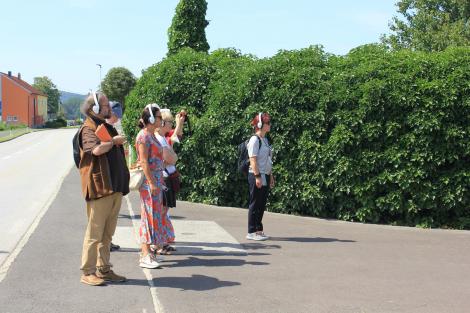 This allows visitors to walk through Mauthausen or Gusen, hear and read historical information, and see images of how the camp looked both in the past and today. The Safeguarding Sites team hopes to learn from Dr. Glück about building good relationships with local communities in order to inform our work with other sites.

Work continues on the Charter

The visit to the three camps was extremely valuable in refining our draft Charter. Such trips help us to see where we had been naïve or idealistic, and help us to understand the reality of dealing with Holocaust heritage today, nearly 80 years after the end of the war. The approaches to site management need to be diverse and adaptable to current situational needs.

Huge changes to sites have already taken place that cannot be reversed. For example, to see communities living in the footprint of a former camp helps us to understand that desirable things such as “buffer zones” between domestic housing and former camps is simply impractical and unworkable. It has also helped us to understand how much work remains to be done in identifying and acknowledging the remains of former sites on the ground. Such work is a mark of respect for the victims, and helps educational work with local, national, and international communities today.

Sites of the Holocaust and the Genocide of the Roma
Austria