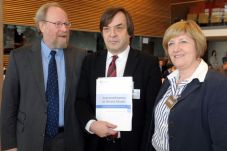 The German Bundestag has released a report written by an independent panel of experts on antisemitism in German society.

On 4 November 2008, the German Bundestag took the initiative to strengthen the fight against antisemitism and to continue to promote Jewish life in Germany. To further these aims, the federal government set up an expert panel of academics and practitioners to write periodic reports on antisemitism in Germany and to formulate recommendations for the development and advancement of programs to combat antisemitism.

The report found that anti-Jewish feeling is "significantly" entrenched in German society, and that there is "a wider acceptance in mainstream society of day-to-day anti-Jewish tirades and actions."  The report identified latent antisemitic attitudes in 20 percent of the population, and indicated that more than 90 percent of antisemitic crimes are committed by offenders who identify with the right-wing political spectrum.  It was noted that the Internet has played a key role in spreading Holocaust denial, far-right, and extreme Islamist views.

The experts placed Germany midway in their assessment of other European countries in relation to the spread of antisemitism.

The experts stated that a comprehensive strategy for combating antisemitism does not exist in Germany, and that such a strategy should invest in long-term and sustainable measures made in close cooperation between government institutions and social organizations.

Dr. Juliane Wetzel, one of the coordinators of the report and an ITF delegate, said that the findings demonstrate "how important the report is and how urgent the continuation of our expert board and further reports are."

Members of the Bundestag commended the report and pushed for proactive and urgent action on its recommendations.  In his speech to mark the anniversary of the 1942 Wannsee conference, German President Christian Wulff pledged that Germany would keep the memory of the Holocaust alive.

The report is available for download here (in German).

Exhibition and Symposium on the Èvian Conference

The Memorial to the German Resistance and the Center for Research on Antisemitism at the Technical University of Berlin has a special exhibition called “Closed Border. The 1938 international refugee...

A new permanent exhibition has been opened on the site of a former concentration camp in Ladelund, North Friesland, near the Danish border. Between 1 November and 16 December 1944, 300 people died in...