During Pride Month, we honor the tens of thousands of LGBTQ+ people who suffered at the hands of the Nazi regime and strengthen our resolve to counter “all forms of racism and discrimination that undermine fundamental democratic principles.”

While much research into the plight of LGBTQ+ victims of Nazi persecution has been conducted, there are still many gaps, in part because of the difficulty of uncovering these experiences. Because of continued persecution after the war, for example, very few LGBTQ+ people were able to give testimony of their experiences.

The following resources provide helpful introductory overviews for teaching and learning about this important topic.

Gay men were persecuted under Paragraph 175 of the German penal code, which criminalized sexual relations between men. The Nazis revised this statute, which had been introduced in 1871, making it broader and harsher. This Holocaust Encyclopedia article offers a useful overview of the history of this law, as well as its post-war use.

There are very few testimonies of LGBTQ+ survivors of Nazi persecution, in part because of their continued persecution and stigmatization after the war.

Of the 55,000 testimonies of the USC Shoah Foundation’s Visual History Archive, only six come from people persecuted for being gay. These stories of survival, resistance, rescue, and heartbreaking loss are therefore all the more precious. The Archive also includes testimony from other witnesses, who recall their encounters with gay men and women who provided rescue and aid at great risk to their own lives. 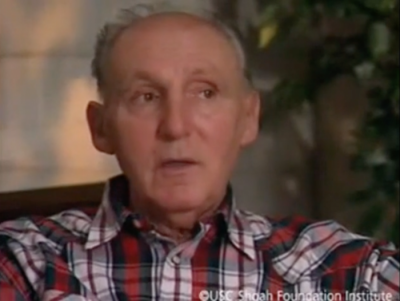 This I Witness mini lesson on “Understanding Love” encourages students to emphasize love as a general human feeling, irrespective of other factors such as race or gender. Using Teofil (Stefan) Kosinski’s testimony from the USC Shoah Foundation’s archive, teachers can encourage students to deepen their understanding of the importance of context when interpreting narratives. The lesson, which can be included as part of a literary skills-building unit, includes instructions for teachers, a worksheet for students, and Kosinski’s video testimony.

This 2000 documentary from Oscar winning directors Rob Epstein and Jeffrey Friedman tells the story of Nazi persecution of homosexuals based on interviews with gay survivors. USHMM historian Klaus Mueller of the United States delegation to the IHRA worked on the film and conducted the survivor interviews.

Created by the Anne Frank House and partners like _erinnern.at_, Stories that Move is a free online resource available in multiple languages that helps learners think about diversity, discrimination, and their own views and choices. One of the stories included in Learning Path 3 is that of Stefan Kosiński, who was persecuted under Paragraph 175, and who provided his testimony to the USC Shoah Foundation’s Visual History Archive.

Visit the site: Stories that Move

Archives play a major role in addressing the great challenges of today. They shape how we think about the past and provide the nuance and knowledge that form the foundation for an inclusive future....