This trip followed up on a visit to the island in September 2019 in which the team assessed the risks facing former Nazi camps on the Channel Island—four labor camps (Borkum, Norderney, Helgoland, and Lager Sylt) and the burial sites on Longis Common—and began discussing steps that could be taken to address them. 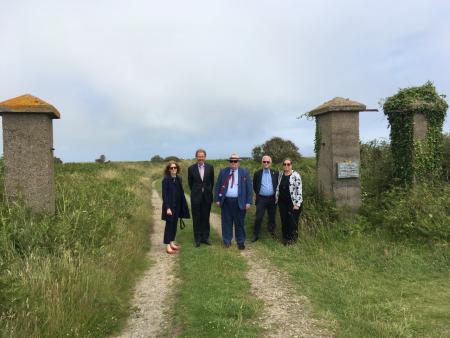 The five-year plan devised by the IHRA’s Safeguarding Sites Project is intended to help safeguard the record in a sensitive manner empathetic to the Alderney community. It combines digital methods, in-person activities and partnerships with the local community.

“Alderney's not unique—there are lots of sites around the world—and what we're trying to do is to establish some good practice,” said Lord Pickles of the team's approach. “I think we'll be able to put something together that's not intrusive, that adds to what's happening, but essentially ensures that the people of Alderney are in charge of this and not any outside bodies.”

During their visit, the delegates met with States Members of Alderney's parliament and other stakeholders, as well as with the Alderney community, updating them on the plan. The team expressed their continued commitment to supporting Alderney and its community in overcoming the challenges facing sites of Nazi persecution on the island.

The team developed a set of recommendations for Alderney based on the Charter being drafted by the IHRA's Safeguarding Sites Project. This Charter will share best practices of addressing challenges facing sites of the Holocaust and Nazi persecution throughout Europe.

The eight recommendations for Alderney are to: