Of the 140,000 Jews who lived in the Netherlands in 1940, 102,000 did not survive the war. Most Jews, Sinti and Roma living in the Netherlands who were persecuted by the Nazis were murdered in the gas chambers at extermination camps like Auschwitz-Birkenau, Treblinka, Belzec, Majdanek, Chelmno and Sobibor. A few thousands died in mass executions or from illness, hunger, exhaustion or slave labor. Now, all their names are memorialized in the Holocaust Memorial of Names in the Netherlands.

Unveiled on 19 September 2021 by King Willem Alexander and Mr Jacques Grishaver, Chairman of the Netherlands Auschwitz Committee, the memorial bears the names of the 102,163 known Dutch victims of the Nazis who were not given a proper burial. Included are the names of Jews, Sinti and Roma who were persecuted and deported from the Netherlands, and Dutch Jews who were deported from other countries, who were murdered in Nazi concentration and extermination camps, as well as those who died of hunger or exhaustion during transport and death marches.

The first memorial in the Netherlands to list each individual victim by name, it represents a tangible place where the victims can be remembered, both individually and collectively. Many people have already visited the memorial to look for the names of their family members.

“For the bereaved, it is of inestimable value to have a place where they can remember their loved ones. It means that the names of Holocaust victims will not be forgotten. Moreover, the memorial forms a trait d’union between past, present and – importantly – future,” Jacques Grishaver, Chairman of the Dutch Auschwitz Committee, explained. “Remembrance is not only for those who lived through the war but also for those who did not experience it – the children and grandchildren and following generations. In addition, the memorial raises historical awareness of where wars can lead, while also encouraging people to reflect upon and learn from the Second World War.” 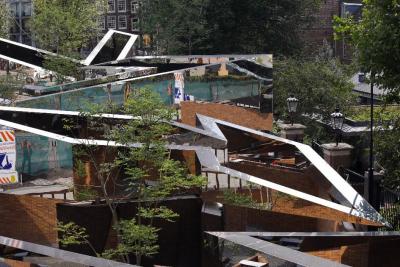 Behind the Holocaust Memorial of Names

The memorial is located on Weesperstraat in an area of Amsterdam which was predominantly Jewish prior to the Second World War.

Designed by the renowned architect Daniel Libeskind, the memorial is made up of four Hebrew characters that translate into “In Memory Of.” Visitors to the memorial encounter a labyrinth of passages made up of two-meter-high brick walls. Each brick is inscribed with the name of a victim of the Holocaust or the genocide of the Roma, as well as their date of birth and age at death.