On 28-30 June 2021, the Elie Wiesel National Institute for the Research of the Holocaust in Romania, in cooperation with the local authorities in Iasi and the Special Representative of the Romanian Government for Promoting the Policies of Memory, for Fighting against Antisemitism and Xenophobia, hosted a series of commemorative events to mark 80 years since the Iasi Pogrom, one of the darkest episodes of the Holocaust in Romania.

The history of the Iasi Pogrom

Prior to the Second World War, the Romanian Jewish community was one of the largest in Europe. The Iasi Pogrom marks a critical event in the attempt by the Romanian authorities and Nazi Germany to annihilate the thriving community which had existed for over 300 years.

The Iasi Pogrom began on 28 June 1941 and was perpetrated by Romanian and German soldiers, members of the Romanian Special Intelligence Service (SSI), police, and civilians, who plundered and murdered thousands of the city’s Jews. Thousands more were arrested and taken to the police headquarters, the Chestura, only to be shot and killed the next day on “Black Sunday” by Romanian soldiers. Sealed “death trains” carrying approximately 4,000 Jews were transported back and forth between railway stations, leading to the deaths of 2,650 from thirst or suffocation.

Honoring those who suffered

Remembering these horrific events and joining together to honor the victims and survivors is essential. This year, efforts to commemorate the anniversary of the Iasi Pogrom took on many forms.

Events included wreath-laying ceremonies at the cemeteries in Iasi, Targu Frumos and Podul Iloaiei, an international academic conference hosted by the Alexandru Ioan Cuza University of Iasi (Iasi 1941-2021: Remembrance, Acknowledgment, Oblivion), cultural events, the inauguration of the Memorial Museum dedicated to the victims of the Iasi Pogrom, and the inauguration of the memorial site at the former police headquarters. High level Romanian officials joined the events along with international representatives, members of the Jewish community, diplomatic corps, local authorities and students. 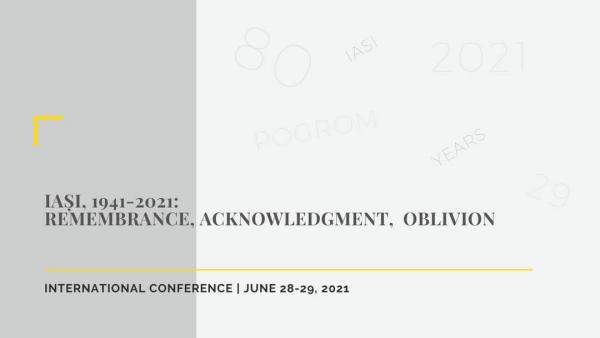 Malmö, Sweden: 13.10.21 – The International Holocaust Remembrance Alliance (IHRA) joined world leaders, and international organizations including the CoE, EU, FRA, OSCE, the UN, and UNESCO at the...

On 9 September 2021, Slovakia commemorated the Memorial Day for Victims of the Holocaust and of Racial Violence. Established in 2000 by the Slovak Parliament, the day marks the date in 1941 when the...