Calling attention to the former Roma concentration camp in Lety 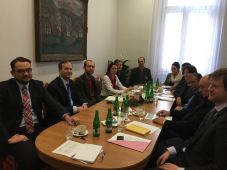 Four members of the IHRA Committee on the Genocide of the Roma visited the Czech Republic to discuss Roma genocide remembrance, research and education and particularly the situation of the memorial site for the Roma victims in Lety u Písku.

The delegation was received by Ji?í Dienstbier, Minister for Human Rights and Equal Opportunities and Legislation and Petr Drulák, Deputy Foreign Minister on 26 February 2015. The visit followed discussions which took place at the IHRA Manchester Plenary meeting in December 2014 where the Committee on the Genocide of the Roma highlighted the need for a respectful place of commemoration at Lety.

Currently there is a pig farm on the site of the former concentration camp. During the meeting, however, the IHRA delegation was informed that the removal of the pig farm is an objective of the new Roma Integration Strategy which was adopted by the Czech government on 23 February 2015.

The programme further included meetings with representatives of the Roma civil society who welcomed the international attention calling for concrete steps by the Czech government to create a respectful memorial site in dialogue with the Roma community.

The IHRA committee on the genocide of Roma was received by the Czech head of the delegation, in a meeting with representatives of several ministries and Roma civil society. The Committee was represented by Karen Polak (Netherlands), Lars Lindgren (Sweden), Michal Schuster (Czech Republic) Mirjam Karoly (OSCE Office for Democratic Institutions and Human Rights).