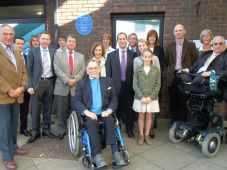 The Association of Jewish Refugees (AJR) was delighted to unveil a special commemorative plaque on Thursday, 24 October 2013 at the National Spinal Injuries Centre, situated on the site of Stoke Mandeville hospital, to honor the life and work of Sir Ludwig Guttmann.

As well as members of Sir Ludwig’s family, guests attending the event, which was organized by the Buckinghamshire NHS Healthcare Trust and the AJR, included representatives from The Council for Assisting Refugee Academics and the Poppa Guttmann Trust.

Sir Ludwig is now widely known as the founder of the Paralympics having fled Nazi Germany and found refuge in Britain in March 1939. His escape was made possible by the Society for the Protection of Science and Learning (now succeeded by the Council for Assisting Refugee Academics) which was responsible in the 1930s for finding posts for a large number of refugee academics and scientists, mostly Jewish, who had been dismissed from their positions by the Nazis.

Having been stripped of his dual roles as a neurosurgeon at the Wenzel Hancke hospital in Breslau and a lecturer at Breslau University in 1933, he went to work at the Breslau Jewish Hospital, where he became medical director in 1937. Famously he intervened to protect his Jewish patients, particularly at the time of greatest danger, during "Kristallnacht" in November 1938 when he defied the Gestapo and SS men who descended on his hospital with the intention of deporting Jews to concentration camps.

Sir Ludwig, who received an OBE in 1950 and a CBE in 1960, and who was knighted in 1966, was an active and longstanding member of the AJR, serving on its Board for over 25 years. As well as participating as a speaker at an event in April 1953 to commemorate the 20th anniversary of the Nazi boycott of Jewish businesses, the first official anti-Jewish action undertaken by the regime after Hitler’s accession to power in 1933, Sir Ludwig acted as one of the distinguished patrons of the Thank-You Britain Fund, which was set up in the 1960s, under the administration of the AJR, to raise money from the Jewish refugees from Hitler to promote scholarly research, as a token of gratitude to their new homeland.

He gave generously of his expert advice to the AJR on questions relating to the homes for elderly refugees that it administered jointly with the Central British Fund and at least one ex serviceman and AJR member, Kenneth Fraser (Kurt Fleischmann), gravely wounded at Arnhem in September 1944, was able to cope with his injuries thanks to Guttmann’s new treatment and lived on until 1972.

When Her Majesty The Queen opened the magnificent new sports stadium at Stoke Mandeville on 2 August 1969, AJR Information commented: “If we had been told thirty years ago that one day someone in our midst would walk side by side with the Queen and act as her host at a public function, most of us would have dismissed the story as the product of wild and unrealistic imagination. And yet, it came true a few weeks ago, when Sir Ludwig Guttmann welcomed Her Majesty who had graciously consented to open the Stoke Mandeville Sports Stadium for the Paralysed and other Disabled.”

Frank Harding, a Trustee of the AJR, said: “It gives us great pleasure to honoor the life of Sir Ludwig Guttmann whose work and legacy have been rightly celebrated and have had an enormous impact on the lives of many hundreds of individuals in the United Kingdom and on British society and of many thousands of athletes across the world.”

Through its plaque scheme, the AJR is establishing permanent memorials to some of the most prominent Jewish émigrés who fled Nazi oppression and found refuge in Britain as well as places and buildings with a strong connection to the Jewish refugees.

The first AJR plaque, to honor the life of Sir Hans Krebs, was unveiled at the Department of Biochemistry in Oxford in May 2013. The next plaque will be unveiled on Tuesday, 19 November on the site of the Cosmo restaurant in the Finchley Road, a famous meeting place in for the refugees.