At a time when many witnesses of this tragic history are disappearing, remembering is more than a tribute to millions of shattered lives. It is also indispensable support for reflection in order to draw lessons from the past, awaken vigilance and encourage commitment today. A dramatic history that must be useful in the present. Our society, in the grip of various crises, is hit by the blows of identity-based and nationalist extremism, which feed a dangerous spiral towards the worst. The Camp des Milles Foundation - Memory and Education, and the Prefecture of Bouches-du-Rhône are organizing a commemoration at the Memorial Site's Memorial Wagon on Thursday, 27 January 2022 at 15:00 (CET). The ceremony can be viewed on Facebook.

The Milles’s Memorial Wagon is installed on the very site of the deportation in the summer of 1942 of more than 2,000 Jewish men, women and children to Auschwitz-Birkenau where they were murdered. This year, this ceremony will be all the more symbolic as it inaugurates the 80th anniversary of the deportation of Jews, notably from the Camp des Milles by the Pétain government. In 2022, the Memorial Site inaugurated in 2012 will also celebrate its 10th anniversary! This event invites us to redouble our efforts to ensure that this work of remembrance has an impact TODAY. The Day of January 27 reflects the international recognition of the universal scope of the genocide of the Jews. The universality of this particular story is at the heart of the knowledge transmitted by the Camp des Milles Memorial Site on the fundamental human mechanisms that can lead to the worst, but also on the human capacity to resist it, each in his own way. Two great witnesses will be presented: Mr. Herbert Traube who escaped from the last convoy from Les Milles to Auschwitz, then a fighter in the Foreign Legion for the liberation of France, and Mrs. Denise Toros-Marter, deported to Auschwitz at age 16. They will exchange conversations with young people from the military high school in Aix-en-Provence, from the EPIDE (Establishment for Integration into Employment), and high school girls from the Dumont d'Urville high school in Toulon during this day of commemoration. This official regional ceremony is held at the invitation of Mr. Christophe Mirmand, prefect of the Provence-Alpes-Côte d'Azur Region, Prefect of Bouches-du-Rhône, and Mrs. Sophie Joissains, mayor of Aix-en-Provence, in the presence of Mr. Renaud Muselier, president of the region, Mrs. Martine Vassal, president of the Bouches-du-Rhône Departmental Council, Mr. Alain Chouraqui, president of the Camp des Milles Foundation - Memory and Education, and Mr. Bruno Benjamin, president of Crif Marseille-Provence. 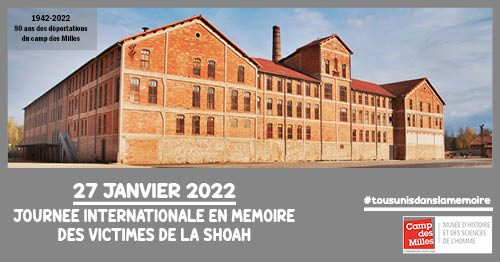