As a guest speaker of the screening Minister of State and Head of the Hungarian IHRA Delegation Szabolcs Takács said that the unanimously adopted resolution of the UN General Assembly that declared 27th  January as the International Holocaust Remembrance Day, a day of mourning that emphasizes the "duty of remembrance and teaching" so that future generations will learn about the stories of the six million victims of Nazi massacres. It is the moral duty of the Government to commemorate those who deceased in the bloodshed of the Holocaust, which is an unprecedented tragedy in the history of the Hungarian Jews and Hungarians as well. The Minister of State said in his speech that the Holocaust was an unprecedented crime, not only in the number of civilian casualties, but also in its characteristics and intentions. The Hungarian Government's firm position is that during the Holocaust, the Hungarian nation died 600 thousand times and that every Hungarian who participated in the persecution or collaborated with the killers committed treason alongside the unforgivable crime of murder. The Government of Hungary proclaimed zero-tolerance against all forms of anti-Semitism to make sure that institutionalized hatred may never appear again. During the event – organized by the March of the Living foundation – the documentary movie titled “The euphoria of being” was screened, telling the story of the 90-year-old Auschwitz-Birkenau survivor Éva Fahidi. 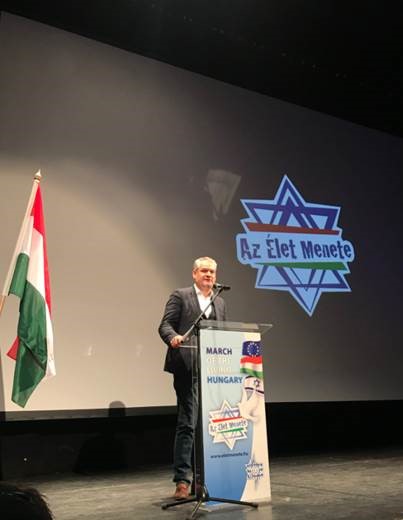