The Holocaust Remembrance Day is commemorated in Greece since 2004, when the Greek Parliament unanimously voted for Law 3218/2004, which established the 27th of January as the "National Remembrance Day of the Greek Jewish Martyrs and Heroes of the Holocaust".  The Greek Parliament, as well as the country’s Regional Administrations, with the cooperation of the local Jewish Communities, organize annually a series of commemoration, cultural and educational events.

This year -due to the pandemic restrictions- most events were held on-line.  From documentaries, to survivors’ testimonies, concerts, lectures and interviews, the 2021 programme covered a vast scale of activities that approached Holocaust history from many aspects and stressed the message of tolerance and respect of Human Rights. Greek officials, at the highest level, joined Holocaust commemoration events. The most symbolic ones are the following:

The Hellenic Parliament, during the Plenary session of January 27, 2021, paid tribute to the Holocaust victims. The session was broadcasted by the Parliament’s TV channel. The Foundation of the Hellenic Parliament organizes an on-line event (on February 4) entitled “Romaniote art. An event dedicated to the Memory of Esther Cohen”.

Greek Prime Minister Kyriakos Mitsotakis marked the 27th of January with a meeting with Dr. Moses Elisaf, Mayor of Ioannina, the first Jewish mayor of a Greek city. The Prime Minister reaffirmed his personal and the country’s commitment to preserve Holocaust memory and stressed that Greece is a Member Country of the IHRA since 2005. The PM also referred to his visit to Israel and Yad Vashem last year, where he visited the ‘garden of the Righteous’ and traced the name of the sister of his grandmother, Evangelia Georgiadou, one of the many Greeks awarded with the title of the Righteous among the Nations for saving Jewish lives during the Holocaust.

The President of the Hellenic Republic Katerina Sakellaropoulou laid a wreath at the Holocaust Monument of Athens, during a ceremony -closed to the public- organized by the Attica Regional Government and the Jewish Community of Athens. The President spoke with Auschwitz survivor Isaac Mizan. “Your presence is an honour, Madame President”, Mizan said. The President of the Republic replied: “The honour is all mine. We must remember”.

The President of the Central Board of Jewish Communities in Greece David Saltiel in his video message released on January 27, refers to the responsibility to preserve the Memory of the Holocaust as well as the need of education and social awareness.

The Ministry of Education dispatched a circular letter to the primary and high schools of Greece indicating a 2-hour educational program on Holocaust history to be held on January 27. The circular also provides useful links to vast educational material produced by the Jewish Museum of Greece.

Political Messages and announcements were issued by: The Ministers of Education, Foreign Affairs and National Defense, the political parties of SYRIZA and KINAL, the Mayors of Athens, Thessaloniki, Trikala, Preveza.  The Greek Organization of National Resistance Fighters (POAEA) also issued an announcement.

The Chairman of the Greek Delegation to IHRA Dr Efstathios C. Lianos Liantis, released a video message with special reference to the upcoming Greek Chairmanship for 2021. 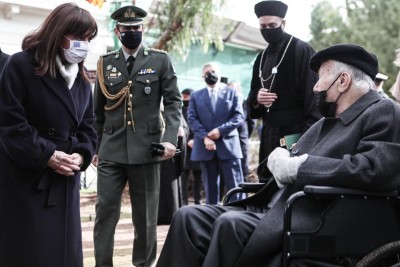