The Theodor Heuss School, the House of the Wannsee Conference Memorial and Educational Site (GHWK), both in Berlin, and the International Tracing Service (ITS) in Bad Arolsen cordially invite you to a memorial service with a book launch on Monday, 28 January 2019. The event is taking place in observance of the International Holocaust Remembrance Day.

Seventy-four years ago, on 27 January 1945, the Red Army liberated the inmates of the Auschwitz concentration camp. Today the victims of the Holocaust are commemorated on that date.

The killing took place in Auschwitz, but the path towards annihilation began in the middle of Germany: with definition and registration, disenfranchisement and dispossession. One of the main deportation sites was in the direct vicinity of the present-day Theodor-Heuss-Gemeinschaftsschule. The Moabit Freight Station Commemorative Site is dedicated to keeping that memory alive.

Pupils of the Theodor-Heuss-Gemeinschaftsschule will present documents from the book in a theatrical reading.

Sawsan Chebli, State Secretary for Civic Engagement and International Affairs of the State of Berlin, will give a lecture introducing the theme. Floriane Azoulay, the director of the International Tracing Service, Dr. Elke Gryglewski, the head of the education department and deputy director of the House of the Wannsee Conference Memorial and Educational Site, and Annedore Dierker, the principal of the Theodor-Heuss-Gemeinschaftsschule, will give welcoming addresses. The event will begin with a visit to the Moabit Freight Station Commemorative Site.

The school choir of the Theodor-Heuss-Gemeinschaftsschule will provide musical interludes. A small reception will follow the service. 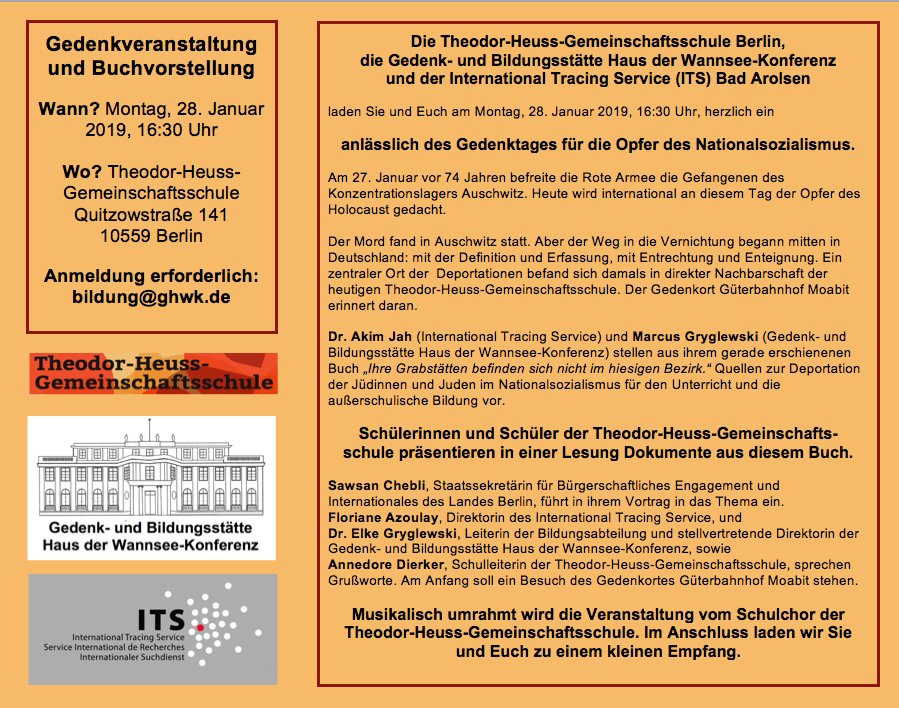