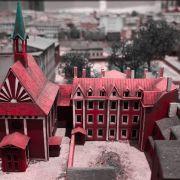 The project aimed to counteract negative attitudes towards Jews by raising awareness about the way Jews shaped the current image of Lodz, and showing the persecution of Jews during WWII. The project consisted of a 3D model of a fragment of the Lodz Ghetto, exhibited in the branch of the Museum at the Radegast station next to the Jewish cemetery, the creation of a central repository of materials pertaining to Jewish life and to the fate of Jews during the Nazi time, and research based on the Lodz archives to enrich the material.

These missions were combined to create an internet-based educational tool, which includes a visualization of the model that was made available in Polish, Hebrew, English and German. Moreover, a seminar for local political leaders, educational policy makers, museum curators and opinion makers was organized. It included a presentation and discussion of the project, as well as a debate involving top local politicians.

The Project was continued in 2016. See the IHRA article about the project here. Litzmannstadt Ghetto Model | IHRA (holocaustremembrance.com)