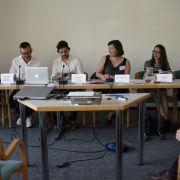 Networks are vital for effective Holocaust education. So, the main goal of the project was to establish and strengthen a network for Turkish and European civil society groups and NGOs interested in working with Turkey in the field of Holocaust education and the prevention of antisemitism. The project followed up on a previous grant in 2014, which built a  partnership between Germany and Turkey.

A workshop week was held at the University of Antalya in Turkey, with the aim of drafting a module and a guidebook. The materials were presented at a two-day conference in Istanbul for educational and NGO multipliers, journalists, opinion makers, and politicians. Finally, a conference in Berlin was held for actors in the German NGO network, which presented the results and allowed an open exchange between participants.

Out of this project came "Commitment without Borders Guidebook," in Turkish and German (German version available here). The guidebook can be considered as an essential resource when it comes to educational approaches and debates around Holocaust and antisemitism in Germany and Turkey.