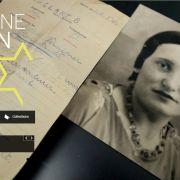 The Kazerne Dossin digitized more than 800,000 documents related to the deportation and persecution of Jews, Sinti, and Roma. The digitized archives shall be made available to other institutions such as Yad Vashem, the Auschwitz State Museum, the Mémorial de la Shoah, the United States Holocaust Memorial Museum, and the visitors of the Kazerne Dossin through a secured  portal site. The project activities include the programming and correction of indexes, the programming of the digitized documents, and the development of a search robot.

The photo shows the search portal on which online users can search the photo collection and deportation lists of all deportees deported from the Dossin barracks in Mechelen, Belgium, to Auschwitz-Birkenau, Buchenwald, Bergen-Belsen, Ravensbrück and Vittel. The website also contains the photos of Jewish men, women and children, living in Belgium before the war and deported from France.