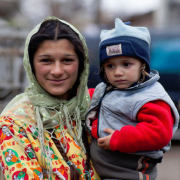 Yahad-In Unum's researchers are dedicated to uncovering the genocide of the Roma in the former territories of the USSR and Romania (Romania, Moldova, and Transnistria). This project aimed to investigate and establish evidence of the fate of the Roma during World War II in two countries: Romania and Moldova.

The participants used three main methodologies: setting up archives, collecting testimonies, and identifying execution sites. The information collected during research trips was gathered on a website including a map. The researchers participating in the project also intended to develop a toolkit for teachers in several languages describing various aspects of the Roma genocide.