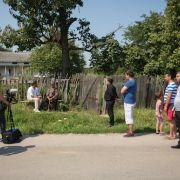 This project was a continuation of previous year's efforts to investigate and establish evidence of the fate of the Roma during World War II in Romania and Moldova, which was co-funded by the IHRA. The project aimed to deepen its research on the persecution of the Roma in Romania in the regions of Botosani and Suceava.

Roma survivors were interviewed and deportation routes were reconstructed. The disparity of policies towards the Roma in Romania was also examined. The results should help the organization to eventually develop maps of the deportation of Roma. By the end of 2014, a conference was organized in order to distribute the findings to a wider audience.