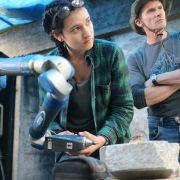 This project aimed to raise awareness of the causes and consequences of cultural and physical genocide within Jewish cemeteries in order to tackle racism, xenophobia and hostility in the present day. New research was conducted to explore the relationship between the destruction of property by Nazis and their collaborators, and the use of religious spaces as killing sites. A series of “social action projects” were undertaken at selected Jewish cemeteries in Oświęcim (Poland), Piaski (Poland), Wąwolnica (Poland) and Rohatyń (Ukraine) where the project partners worked alongside NGOs, volunteers and community leaders to locate unmarked killing sites, graves and tombstones, and to clean and restore the sites.

The results of the two aforementioned initiatives was disseminated via a state-of-the-art digital platform. The project adopted a unique interdisciplinary methodology to achieve its aims, utilizing techniques from history, archaeology, digital humanities, conservation and community engagement. Target groups were political and educational decision makers in the Polish government and the UK, mayors, civil servants, police, educational multipliers and religious- or community leaders. Alongside the social action projects, these people were targeted through face to face meetings, an app version of the digital platform, and the distribution of a final project report. The project results were documented in press releases and a blog. Additional results are planned to be released.