The Lost Sephardic World of the Western Balkans 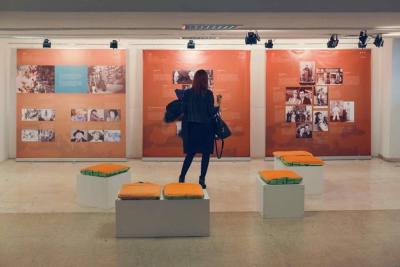 From 2017 to 2018, Centropa created an exhibition on the history of Jews in the region of the former Yugoslavia. he exhibition consists of eleven panels. Four of the eleven panels form the core of the project: drawing from Centropa’s database, these panels tell the story of six families in their own words and photographs — giving equal weight to periods before, during and after the Holocaust. Visitors to the exhibition learn how the centuries-old flourishing Sephardic Jewish history in former Yugoslavia was destroyed during the Holocaust, but through the lens of these six families, the exhibition also tells the story of those few who survived, and how they helped rebuild Jewish life in the Western Balkans until today.

The exhibition website, lostsephardicworld.org, serves as a one-stop shopping site for teachers in the Balkans, as they can not only view the exhibition posters digitally, but they can also watch Centropa films and download teaching materials. The English-language exhibition first opened in October 2017 at the Historical Museum of Bosnia Herzegovina Sarajevo. Centropa´s director Ed Serotta and the director of the museum, Dr. Elsa Hasimbegovic, gave the introductory remarks. A brochure was also developed in multiple languages.

The exhibition was shown for activities around Holocaust Memorial Days to commemorate the victims of the Holocaust, at the Foreign Ministry of Macedonia in Skopje (January 25-26), in Dubrovnik (January 29- 31, 2018), and at the Children Cultural Center in Belgrade (March 15- April 1 2018).