International Colloquium: Bystanders, rescuers or perpetrators? The Neutrals and the Shoah - Facts, Memories, Myths and Countermyths 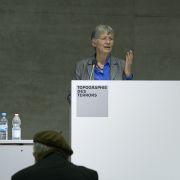 This project examined the attitude and reaction of the neutral countries during World War II (specifically Argentina, Ireland, Portugal, Spain, Sweden, Switzerland and Turkey) to the Holocaust. Recent archival research has challenged long-standing opinions on refugee policies and rescue myths, however, only from a national perspective.

A pioneering international colloquium within this new research field including a comparative perspective was organized. Scholars with expertise in all the countries involved were invited to exchange the latest research findings and establish a network for international exchange and cooperation. A call for papers also ensured the chance for young scholars to participate and contribute. The lectures described to what extent countries tried or were ready to save Jews or remained passive. Also the presentation explained how the states after the liberation until now examined this topic – on the level of historical research, societal discussions and traditional use for state heritages.