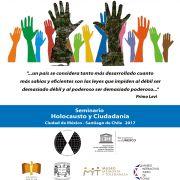 The project aimed to develop citizenship in Chile and Mexico through creating diverse and inclusive communities that bring together local actors to reflect, discuss, and exchange ideas regarding issues directly related to their work and which are seen as fundamental in Latin America in the 21st Century.

The Holocaust - not part of the curriculum in the two countries - was the main reference point for examining key themes relating to violence, human rights, security, memory, and the role of social media and new technologies in spreading antisemitism, racism, xenophobia. In each country, a two-day seminar and a follow-up session was held, exploring connections between the Holocaust, and citizenship building as a means of preventing genocide. The approaches used were based on the method  of US Holocaust Memorial Museum (USHMM) and Facing History and Ourselves (FHAO).

The target audience was key social and political actors working at a grassroots level and in high-ranking positions, including opinion makers, journalists, NGO activists, school directors, members of the judiciary and police, and representatives from the Ministry of Education. The project intended to develop social awareness regarding the importance of Holocaust education and its connection with genocide prevention, the creation of new diverse and inclusive communities, the establishment of a regional network, and the publication and distribution of the project's results online. Moreover, seminar attendees were invited to participate in the CIHE projects in each country and a community newsletter was being set up.