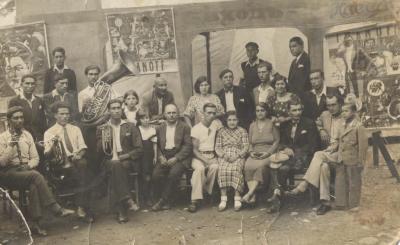 This two-year project, with an international team of researchers, examined the under-researched histories and divergent fates of circus owners, families, and performers under National Socialism in a comparative approach on a European level. It documented their lives, the discrimination, persecution and deaths of travelling circus people, and also their survival strategies.

The project's interactive webpage presents the research results and includes images and video clips of testimonies, other life stories and recordings of circus life from the 1930s and 1940s. Students are invited to read the short biographies on European circus people during WWII and to highlight which kind of security strategies minority groups developed to survive. By doing this within a precise chronology, they will have to take into account contexts, geographical area, identities, gender, family structures, life courses.

As mentioned on the website, "Life stories are a strong pedagogical tool to deepen a better understanding of Europe during the 1930’s and 1940’s, and to develop tolerance and empathy among young generation, and offer a new general understanding of marginalized communities’ security strategies."

Some of the life stories, as discussed on the website, are below:

Brothers Blumenfeld: The Fall of a Jewish Horse Circus Dynasty

The Blumenfeld Brothers Alex [real name Emanuel] (1885-1942), Alfons (1887-1942), and Arthur (1889-1951), as well as their eight further siblings came from a widespread German-Jewish travelling circus family. The three directors played a leading part in the program: Alfons with a liberty horse act, Arthur with two trained bulls, and Alex with a high school dressage on his famous horse “Puppchen” (Little Doll), which danced to operetta melodies.

James Michael was born in Berlin in 1916. At the age of twelve, James Michael joined the Moroccan tumbling troupe “10 Abdullah Ben Mohamed Bonamannes”, where he received a training as an ‘Arabic’ acrobat on top of a human pyramid.

In cooperation with the European Circus Association, local circus associations and museums in various countries, the project was presented to a wider public.