Diplomatic 'Games' over the Deportation of Jews from Macedonia 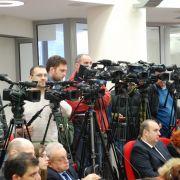 Due to a significant gap in research concerning the historical events that led to the extermination of 98% of the Jewish population in what is now North Macedonia. This project researched and shed light on the negotiations between the Bulgarian and German government at the end of 1942 that resulted in signing a treaty on the resettlement of 20,000 Jews from North Macedonia and Thrace.

The exploratory research was carried out by a core team of three assistant professors at the Institute for National History Skopje. It involved collecting the few documents existing in North Macedonia as well as further archival research in different countries. The results of the research werepresented during a conference and published in form of a book.