The Beginning of the End: Klooga. Why we are still talking about it? 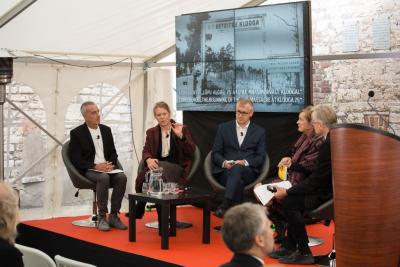 The Klooga concentration camp was one of the main camps of the Holocaust in Estonia in 1943-1944, resulting in the systematic murder of approximately 2400 prisoners on 19 September 1944. In order to increase awareness about a not-widely known episode, the Estonian “case” of the Holocaust, and ensure that its history is referred to in a truthful manner, the Estonian Institute of Historical Memory organized a conference, connecting the local history to the overall fabric of events in Europe. The conference “The beginning of the End: Massacre in Klooga 75” took place on 18 September 2019 in Tallinn.

The conference succeeded in analyzing and commemorating the event from an innovative perspective and providing a European-wide insight. More than 80 participants, including political representatives and professionals, took part in the  event, with speeches delivered by experts from Estonia, Denmark, Finland, Lithuania, France and Israel, There was also a written welcoming address by Mr. Balberyszki (survivor of the Klooga camp). The conference attracted international audience and received wide media coverage.  It was followed by a commemoration event the next day, as well as a participatory roundtable discussion. The content was streamed and made available afterwards online, including a special web page developed to disseminate the information in multiple languages.