National Holocaust Museum of the Netherlands 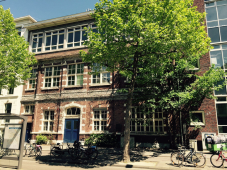 On May 16, the new National Holocaust Museum of the Netherlands opened its doors to the public in what used to be the reformed teaching training school in Amsterdam.

The first exposition is De ondergang van Abraham Reiss (The Demise of Abraham Reiss), made by the renowned Dutch painter, producer and actor Jeroen Krabbé. In a collection of nine paintings, Krabbé tells the life story of his grandfather, who was murdered in Sobibor. With this exhibition, the first stage of the National Holocaust Museum starts. It will be the first location in the Netherlands that presents a complete overview of the history of the persecution and genocide of the Dutch Jews.

The building next door was 'the Crèche' during the Holocaust, from where Jewish children were deported to Westerbork and beyond. Their parents were kept on the other side of the street, at the Hollandsche Schouwburg (National Holocaust Memorial), waiting for their deportation. Several Resistance groups were able to save 600 children, with help from the staff of the teaching training school. The two locations together represent the story of the Holocaust: the National Holocaust Memorial is a place of deportation, collaboration and remembrance of the dead, the college is a place where authentic human courage and selflessness were reflected.

The museum is still in development and will pass through several stages in the years ahead. In the first stage, it will present a varied range of exhibitions and events to acquaint visitors with the multitude of stories about the Holocaust. These stories will be told in an artistic form, illustrated by authentic objects, and based on personal accounts. The emphasis in this first stage will also be placed on raising the funds required for the final goal: a permanent National Holocaust Museum that places the history of the persecution and genocide of Dutch Jews in a broad international context.

On the occasion of the opening, the Mayor of Amsterdam announced that the City of Amsterdam will launch a dedicated 10 million Euro Fund, as a compensation for the behavior of post-war municipal civil service. One of the likely projects to benefit from this gesture is the Memorial that lists the names of all Dutch victims of the Holocaust. After a discussion that took many years, an agreement on the location was reached recently. The memorial will be designed by Daniel Liebeskind, who also designed the IHRA logo, and should be realized within two years.

The Netherlands has been a member of the IHRA since 1999.